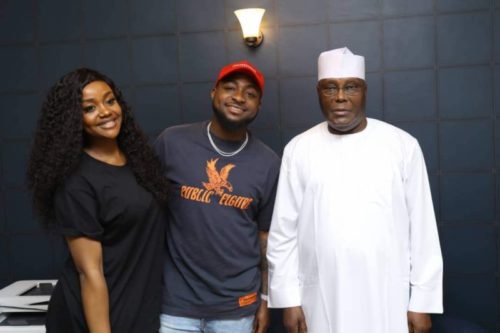 Pop star Davido is on the roll again even as he gets more entangled in politics.

The ‘Nwa Baby’ crooner and his girlfriend Chioma are still waxing strong despite rumours of an alleged breakup between them.

Davido seems to be an ardent supporter of the Peoples Democratic Party (PDP) as he met up with the party’s presidential candidate Alhaji Atiku Abubakar. The singer shared a picture of himself and his girlfriend posing with Atiku.

You’ll recall Davido campaigned rigorously for his uncle under the PDP in the Osun State gubernatorial race although he didn’t win.