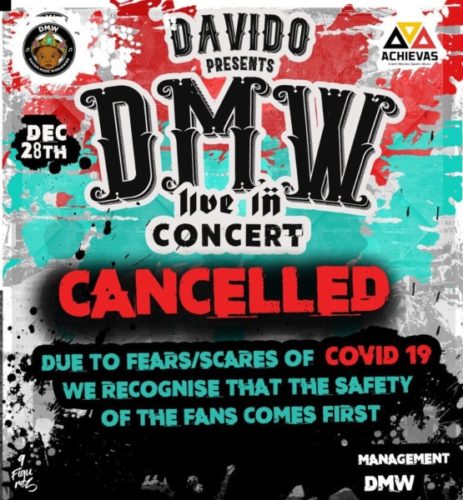 Davido has announced the cancellation of the forthcoming DMW Live In Concert in December.

Due to the prevalent pandemic Covid-19, Davido Music Worldwide (DMW) would no longer be having its planned all-star concert.

Some days ago, Davido announced that his record label would be having an end of year concert at the Eko Hotel & Suites on December 28.

In a new post on Instagram, the singer said that cancelling his concert was a difficult decision but had to be done due to the increasing cases of Corona Virus in Lagos.

According to him the health of his fans, staff and everyone, in general, was a bigger concern hence the decision to cancel.

“Following increased and overwhelming concerns with the rise of Covid-19 cases in Lagos, we have made the difficult decision to cancel the upcoming ‘Davido Presents DMW Live In Concert’ scheduled to take place on Dec 28th.”, an excerpt from his note on Instagram.