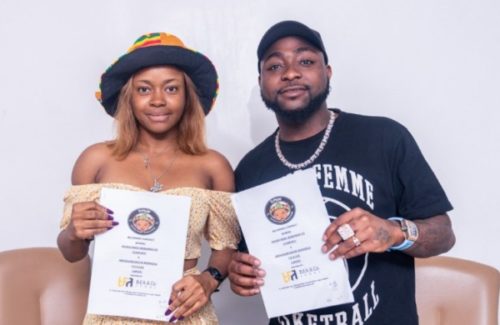 Davido has officially signed his first female artiste to his record label DMW.

A few days ago, Davido announced that he would be signing his first female artiste pretty soon, he has done that now. A few hours ago, the DMW boss welcomed Liya to his record label after the ceremonial signing of contract papers.

Davido shared photos from the signing ceremony with Liya as they held up the contract papers. Some days ago, Deinde, from MTN Project Fame, was also signed to DMW.

So far Liya has her first song ‘Be My Vibe‘ out.

Welcome officially to the party! DMW 1st lady! @yes_liya_ from here it’s onwards and upwards ! On this day I make this promise to you. Imma make you a global star! Never 🧢 !! #30BG cc @bfaandco 🖊 📝 pic.twitter.com/cZpvSiFcUu