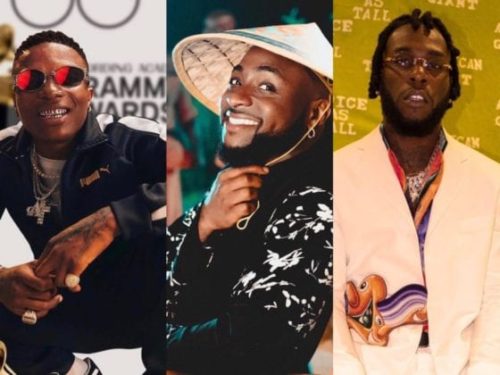 Forbes Africa have listed the Nigerian trio of Davido, Wizkid, and Burna on it’s Icons List alongside other Nigerians.

The list is an all-inclusive one that incorporates names of prominent Nigerians from all works of life that have made a distinction in their various fields of endeavor.

From Nigerians who made their mark in Hollywood, to Grammy Award winners, the list identifies any individual in Africa with an unprecedented or marked peculiarity that courts global attention.

According to the publication, Forbes Africa described Burna Boy as one of the most successful music stars in Africa, Wizkid as one of the biggest and brightest stars in Nigeria, and Davido; as one of Africa’s most influential artists.

Other Nigerians in the list includes; Chimamamda Adichie, Mr Eazi, Genevieve among others.

[THREAD]FORBES AFRICA’s 100th issue is here, and with it, the mother of all lists! Africa, a continent brimming with beauty and diversity, has produced some of the finest minds and most incredible ideas, be it in business, science, art, or entertainment. #FORBESAFRICA100Issue pic.twitter.com/OYQzwHJzLf

From Hollywood exports and Grammy artists to award-winning ideas that can save the world, Africa is not only diverse in its people but also in its industries and creativity. Get the 100th issue of FORBES AFRICA available in store now or digital copy here: https://t.co/i3z0RPwVAM