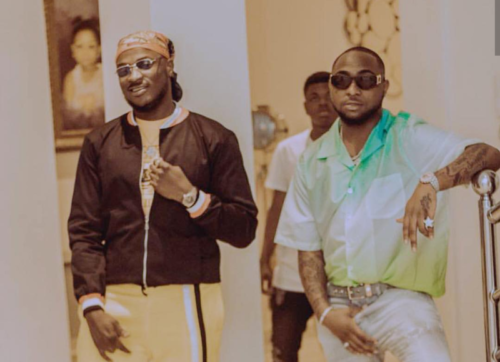 Golden Boy Entertainment CEO Patrick Anyaene is unhappy with the way he has been treated by DMW boss Davido after he signed his artiste Peruzzi. Patrick claims he has not been fully settled as was earlier agreed.

The GB Ent. boss opened up to Sunday Scoop about the development while revealing that songs like Fia, Aje etc., were properties of his record label.

He stated, “I don’t have problems with Davido; I have issues with Perruzi, my artiste. All the songs Davido released since last year November are my records. They are my records because those songs were written by my artiste. Songs like Fia, Ada, Mind by DMW, Aje by DMW and other songs they might be working on now are all the property of Golden Boy Entertainment.”

Mr Anyaene said he doesn’t want to be cheated but he deserves to be rewarded and fully settled.

“Peruzzi has been going for shows and getting paid; I have been patient with them since November. I am unhappy because I have not been settled. As a businessman, when you invest money in an individual, you expect a return.

“Davido has given Peruzzi some guts to do whatever he likes; he has forgotten that he signed a contract with me and I have lawyers on the case.

“Perruzi started working with me in 2016 and I was paying him salary. I officially signed him in 2017 for a three-year contract. He has breached a contract and he is an ingrate,” he lamented.