WurlD was having an interaction with fans when the said disrespect happened. A Twitter user misquoted a lyrics linking it to WurlD and the Trobul crooner simply said that wasn’t his style.

However, his reaction has torn fans of Wizkid apart as they have decided to bash WurlD for disrespecting the Starboy.

Some Wizkid FC fans have called him an upcoming artistes, others have threatened to delete his songs and any others trash talking the singer.

Due to backlash WurlD was forced to delete his tweet. 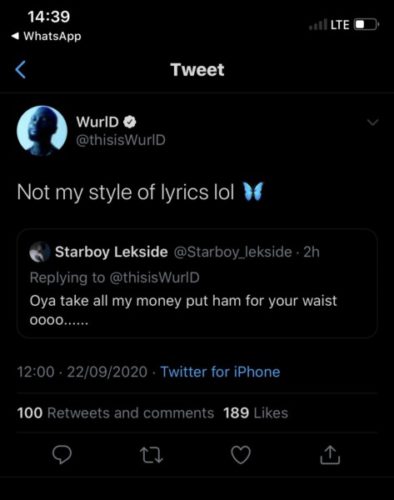 So WurlD chose to disrespect the greatest ever Wizkid. Noted 📝 pic.twitter.com/dXHaTYm4dv

See what WurlD did to wizkid fc.

Can never my FAVE.

My Fave is DAVIDO!!!!!!! OBO! pic.twitter.com/encYjSrGsH

Wurld: Wizkid Lyrics is not my kind of Lyrics.
FC: Raining all sort of insults on Wurld, Premium Tears all over my TL…

Wurld 600 years of Enjoyment for u 😂🥇 pic.twitter.com/zZTKIHqwm5

If we’re being honest, Wurld is more talented and lyrically better than Wizkid. It’s not by repeat soco and joro 100 times.

Infact make I delete that guy song for my phone. Rubbish, he even get mind sha