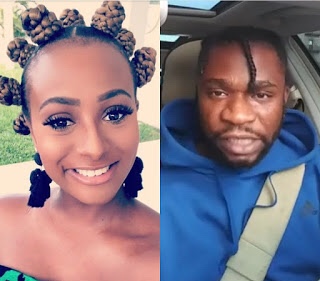 Instagran sensation Speed Darlington is back again with more concerns for DJ Cuppy.

Speedy earlier made the news after he wanted a collaboration with DJ Cuppy. However, he was wrong about pronouncing her calling her DJ ‘Kupe’ instead of ‘Copy’.

The female disc jockey, swiftly replied by giving him a little lecture on her name pronunciation.

A resilient Speed Darlington again is taking his shot at DJ Cuppy. The rapper in this new video clip asked the disc jockey to come be his girlfriend. Speedy said he wanted to ride with Cuppy in the front seat of his car.