Search
By Dre Pompey on May 12, 2018 Gist
ShareTweetShareTelegram

Some years back, controversial blogger, Kemi Olunloyo abuse Olamide, accusing him of embracing ritual routine in his music career, just for thunder to almost strike her down when she was washing her cloth on a table.

Disclosing how she was struck by Thunder, She wrote: “@HNNAfrica
1. This morning at 8:06am I was struck by lightning behind my house in an early morning storm. It was a  bolt the whole city saw. I dived to the ground fast before it hit the ground. It hit the table I was washing on. My heart stopped for 20 secs and was revived. #hnnenvironment

2. My doctor prescribed anxiolytic meds to calm my nerves & palpitations. I slept 4 hours. I feel like I DIED and returned. My dad says I have 9 lives and today he’s right. I’m still shaken. PLS stay indoors in any storm regardless of obvious lightning or not. Thx to everyone”.

However, an older tweet showed that Kemi Olunloyo likely got struck by Thunder owed to a claim she created about Olamide in which she declared that he does money rituals.

See her screenshot below; 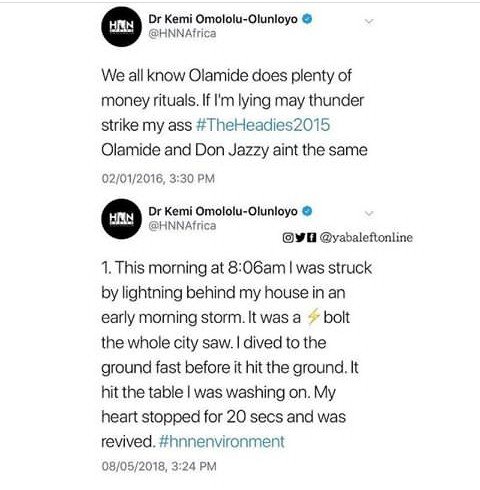