Yemi Alade – ‘Woman Of Steel’ (Album) is Out

She experiments successfully with a Latino vibe on “Give Dem”, while Afrobeat numbers like “Vibe”, “Nobody” and highlife gems like “Yeba”, the provocative Duncan Mighty duet “Shake” gave the album that unapologetic African tone expected from the renowned Mama Africa. “Steel” boasts a modern remake of Angélique Kidjo‘s classic “Wombo Lombo” christened “Shekere”, with the iconic multiple Grammy Award winner. 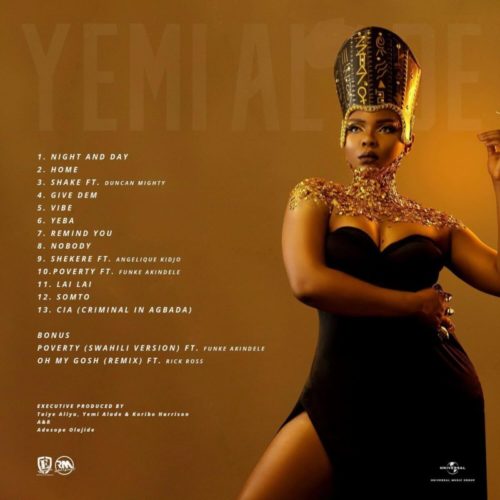 She dives deep into the African-highlife with Nollywood mega-star Funke Akindele on “Poverty”, rejecting the disease while also stressing that she is working really hard to be the richest possible version of herself while proclaiming prosperity and good health. In true Yemi Alade fashion, she also includes a Swahili Version of “Poverty”.

Midway through the album, we are serenaded with Yemi’s award-winning pipes on the soothing R&B number titled “Remind You” where she lists out the endearing qualities exhibited by her lover.

Yemi Alade says she has so much to tell her fans and does just that on “C.I.A”, as she delves into a reggae vibe while exposing the criminal activities of African Politicians.

On the emotive ballad “Lai Lai”, she professes unconditional love for her lover, assuring him that she will always hold him down, a theme which is also prevalent in the album’s opening track, “Night & Day”.