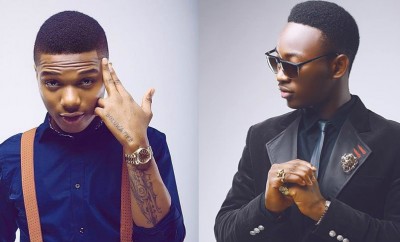 Nigerian singers Dammy Krane and Wizkid sometime ago were at logger heads with each other. The two stars reportedly got into a fight at popular club Quilox.

In a new chit chat with Saturday Beats, the ‘Amin’ crooner reveals that he has let go of the past and Wizkid has been forgiven.

“Wizkid and I went to an event and from there we went out together. It was from there that we became friends again. I have forgiven him because it is just one song and we would still do songs together. We would still do one or two things together but you need to understand that we are all getting to different stages of our lives.”

The leader of Worldstar Movement, said that he makes classic songs that would eventually span over a decade.

“I believe that my songs would last for a long time; they are all evergreen songs and ten years from now, I know that you would always hear Dammy Krane’s songs like Amin and Amen.”

Speaking of his former boss 2Baba, Dammy Krane acknowledged that his relationship with him is still intact and cordial.

“I have a great relationship with Tuface and I have a learnt a lot from him. He is more like a mentor to me in the industry; I have learnt a lot about humility and hard work from him and he is also a God-fearing person. He taught me how to be a businessman as well.”