Search
By NaijaMusic Desk on May 10, 2018 Artiste Bio Gist
ShareTweetShareTelegram 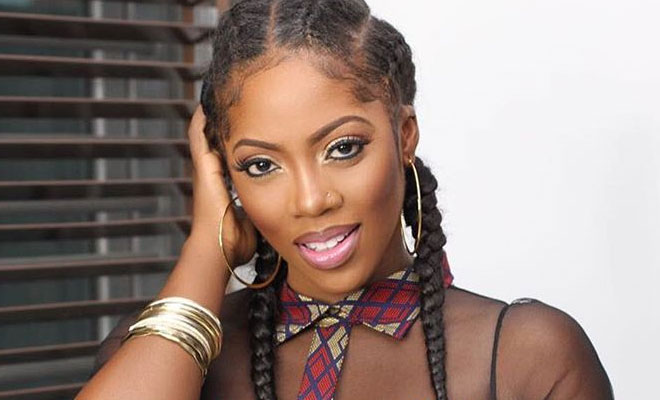 Here’s top 5 Tiwa Savage songs with the highest views on YouTube. Tiwa Savage is a well-known female artiste in Nigeria and even in Africa at large. She was born on February 5, 1980. She is a musical artiste, a lyricist, and performer.

She has also acted in a TV series titled ‘Shuga’.

In the year 2012, she had a music deal with Mavin Records.

Roc Nation also signed a management and publishing deal with her.

She has written songs for top musical artiste while she was in the US.

On July 3, 2013 she released her first album known as ‘Once Upon a Time’ which had several hit tracks such as Eminado, Folarin, Without My heart, Keke kele love and Love me.

Tiwa’s parent gave birth to her in Ikeja, which happens to be Lagos State’s capital.

They took her to London when she was just 11.

Then she learnt how to play the trombone in an orchestra band she joined while she was in high school.

Later, her parents migrated to the United States of America.

She graduated from the University of Kent with a degree in Business Administration.

At age 16, she was a backup singer for George Michael and also musicians such as Kelly Clarkson, Mary J. Blige, and Blu Cantrell etc.

She had a degree course at Berklee College of Music and graduated when she was 27.

In the year 2006, she participated in X-Factor music competition that was held in the UK but she didn’t make it to the final.

In 2009, she had a music deal that enabled her to write songs for Monica, Mya, Babyface, Fantasia and Kat Deluna.

She got married to her estranged husband Tee Billz traditionally on November 23, 2013.

You can read more about Tiwa Savage’s Net Worth and Biography here.

We will be taking a look at Top five Tiwa Savage’s songs that have the highest views on YouTube.

Tiwa Savage featured Ace producer Don Jazzy on this one which also acted as the music producer for the song.

The song happens to be the seventh track from her first studio album, Once Upon a Time.

The song became number 2 on MTV Base’s Official Naija Top 10 chart and also became top ten hits that were released by Vanguard in 2013.

Tiwa revealed that his music producer Don Jazzy created the title for the song.

The track was a hit and it made wave in several music stations in Nigeria.

In any music events, concerts, and festivals she performed this song has always made her fans to dance their heart out.

This led to fans anticipating the video for the song.

The video was shot by Clarence Peters and it was nominated for several awards.

The video was being uploaded on YouTube on November 4, 2013.

The song ‘Malo’ which has Star boy Wizkid was a smash hit track with their lyrics on point.

Spellz was the music producer for this song.

The tune of the song can put you in a mood that you are ready to dance.

The song was released on September 18, 2017. Tiwa released the song from her EP known as ‘Sugarcane’

The video was perfectly structured to correlate the audio of the song.

The location for the video was The New Afrikan Shrine Ikeja, Lagos State.

The music video was directed by Meji Alabi and It was uploaded on YouTube on November 3, 2017.

Tiwa Savage brought out a song towards the last quarter of 2017 that was titled “All Over”.

The song spread very fast and this shows that she is not slowing down her effort to remain in her top spot.

Tiwa flowed very well on the beat unleashing her fascinating lyrics, the song “All Over” is on her second studio album which is titled ‘Red Album’.

She performed the song on BBNaija’s stage.

The video was very colourful, with adorable costumes as she unleashes energetic performance which made the video so lively to watch.

The visual for the song was shot by a popular music video director, someone who has eyes for details who is no other person than Patrick Elis.

Tiwa’s song (Bad) which featured Wizkid was also a hit that music lovers need to give some recognition.

The song was inside her second studio album ‘Red Album’.

It was produced by P2J.

Whizkid and Tiwa Savage took their time to give out a symphonic melody to synchronized with the beat.

Then when it came out, it became another monster hit.

The fabulous display of Mavin in the video was awesome.

The Video was shot by Sesan Ogunro.

The track didn’t make it the ‘Red’ album that was released freely but it was included in the deluxe version of the “RED” album.

She displayed her sonorous voice on this song which shows that she’s a sultry singer.

There were so many people out there that this track my darling that she was referring it to her husband Tee Billz.

Despite the crisis and conflict in her matrimonial home.

The song is a danceable love song.

Don Jazzy and alongside Baby Fresh should be given production credit for the song.