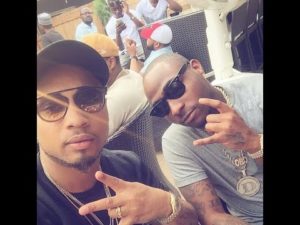 DMW Boss Davido & his cousin, Sina Rambo have been drawn into the pool of discussion over their online posts about the legend of the match between the Super Eagles & Iceland: Ahmed Musa. The 2 artists have been blamed for promoting cultism, particularly the Black Axe Confraternity.

During the middle of the triumph of the Super Eagles over their World Cup rival (Iceland); Davido made a post via web-based networking media about Ahmed Musa – the scorer of the 2 goals that helped the Super Eagles defeat their European rival. In his post, Davido made a note of number 7 – the jersey number of Ahmed Musa; & Sina Rambo went along with him in delighting in the essence of the number, with a remark that read, “Give dem 7.”

Shockingly, one of Davido’s many supporters utilizing the handle @dej_jam, connected the emphasis on the number 7, to promoting cultism. She accused the 2 artists for parading their cult connection. Responding to Sina Rambo’s remark she expressed, “@sinarambo them don carry you join cult too? Dead guys.“