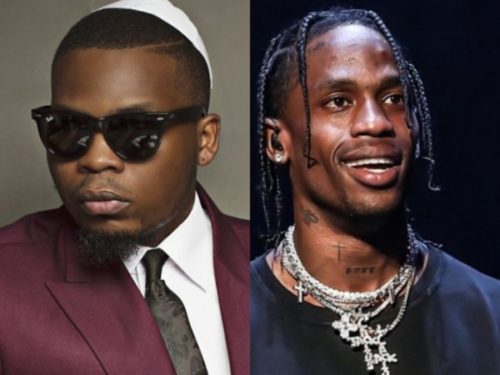 Olamide is working assiduously towards the completion of his tenth studio album and he has got surprises for fans.

Some moments ago, Olamide announced via a tweet that his album has reached 95% completion which got the fans excited.

New rumour making the rounds is that Olamide is finally giving us an album with a good lineup of international collaborations.

In particular, it has been hinted that Olamide teamed up with popular America rapper Travis Scott for a new song which would feature on the forthcoming album project.

There’s a rumoured Olamide & Travis Scott collaboration coming soon. This sounds very exciting and we want to know what y’all think. Will it be a Hit or a Miss? 🤔 pic.twitter.com/YxbJ7Kyitd

Many fans are excited about the news as Olamide plans to make an international worthy album.

I don’t get why you all saying Olamide x Travis Scott is going to sound somehow you think if Olamide want to sound foreign on that track he can’t lmao he will do it with no stress take your time trying listening to Olamide trap songs, nobody’s fault or 999EP don’t be stupid

Earlier this year, Olamide signed a music distribution deal with EMPIRE for the distribution of his music and those from YBNL on an international scale. All fingers are crossed as we anticipate Olamide’s tenth album.