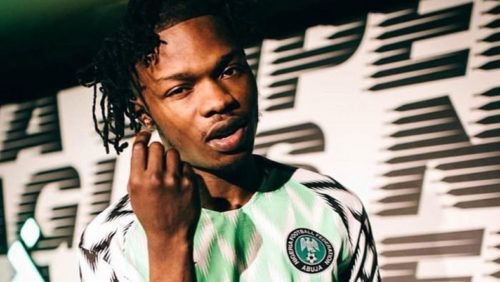 Marlians president, Naira Marley, finds himself on a special sonic path that leads the way as a character in between, finding the love of his life after he settled for-long term street creations.

He finds love in between and goes emotional, off his regular explicit-y.

Marley has released and performed highly contagious records that replicate not even an atom of manner from a presentation that strongly stake and cakes in average Nigerian youth’s mind in their mass, and have totally driven them both male and female, to cling n*ked fun, embracing vanity in folds and hedonistic lifestyle at its maximum height, relatively.

Naira Marley, deliberately shoves down records that makes the average youth who might strongly connect his art, want to partake like in his explicit music visuals and social media clips exposing his myriad dirty street lifestyle; as many Nigerian youths have by-cut their noble brought up to proudly rep “Marlian!” unashamed, and they are yet to serve themselves up with beneficial return after parading “Marlian” phrase continuously, ringing the bell that sturdily emanates from the streets of Lagos, in Port-harcourt, Imo, Abuja and other major entertainment cities in various parts of the country and, that means, Marlian is literally dominating through the art structured in unkind explicit-y.

Well, Naira Marley has dominated almost every part of Nigerian street corners with his contagious music; which initially paced him a controversial pursuit from his 2019 hit record “Am I A Yahoo Boy”, that emanated a deep and stronger awareness after he was arrested and alleged as an internet fraudster the same year.

Between it all, to this point where he has leaned unto creating a song essence that based on serious loving and expressing baked emotion which could tend to reset one feeling from the street tang which naturally seems like a bizarre clot in Naira’s random art, although he still accompanied a beauty which houses his originality alongside the pragmatic motion sonic that cuts deep and really carved him an ultimate delivery that ended in making listeners wallow from joy to the fine and solid instrumentation.

“Chi Chi”, is an absolute newness that couched Naira Marley’s art which really goes beyond him lighting up and smoking a blunt in music visuals, passing out each lyrical essence on records with raw messages that expresses explicit vanity, hedonism, and dirty s3x language orders.

Marley abruptly finds himself a new path that perfectly refined his art and rebrand despite the bizarre; but his undying talents tell how amazing he truly is, between it all.

Despite his lurking street traits that couched the creation, designs Naira Marley’s originality at its peak that goes on high consistency, gushing through his art and telling that more of such creation would amplify his Marlian army with a different image and might change their known demography and how listeners perceive his act of Mannerless, “a zero belt with a thousand trousers” gang, Identity.

As he regularly echoes from songs intermittently and totally represents his art and identity as – Marlian.

RELATED: Teni & Davido Are Meant For Each Other “For You” Review

Naira Marley has created an image for his art that dwindles in street and promotes internet fraud; but yet he is very talented and has shown a sign through this song that clots his art in bizarre to both new and his old listeners who know him for pure vanity, lavish and hedonism; as well as the majority of his core fan would still find more strong reasons to love him even more as he initiates the new man that stands on the point where they are not familiar ever since his last released massive hit song in 2015 titled, “Issa Goal”, that served him up as coolly until now that he created a song with series of the mixture in love, emotion and upholding his identity between.

Yet, Marley seems to be an act that can easily switch sides to procreate what everyone might love from both his old and new converts; he x-rays a path in him artistically that tilt to change, and who knows what the future might bring from the Marlian president?

Truly change is certainly a constant entity – Chi Chi’s love in this character might be the best bet to reform Marley’s life off explicit-y, meanwhile wherever the sugar is the ants follow suit.