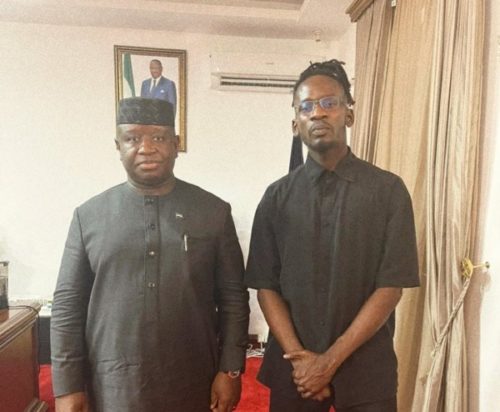 emPawa Africa boss Mr Eazi was in Sierra Leone recently were he paid a visit to the country’s President and Vice. He shared photos with the President Julius Maada Bio and the Vice President Mohamed Juldeh Jalloh.

The ‘Lento’ crooner said he was briefed about what the government was doing to make entrepreneurs in the country have an enabling environment for their businesses to thrive.

On the same breath, Mr Eazi shared a more personal information that his father who served in the Nigerian Army was serving in Sierra Leone while he was born. His father was stationed at Lungi Airport from 1990 – 1992.

Was an Honour Meeting His Excellency Julius Maada Bio , The President of Sierre Leone & VP Mohamed Juldeh Jalloh. Thanks for all the Insight & all the work your government is doing towards creating an enabling environment for young African entrepreneurs. Will be back soon pic.twitter.com/eeejvzdvep

I found out that at the Time of my Birth My Dad was Serving in This Great country.

Little wonder I felt a certain attachment upon Landing.

Big love to all the people of Sierre Leone and see you more Often 🙏🏿 pic.twitter.com/odNvjMPDg8