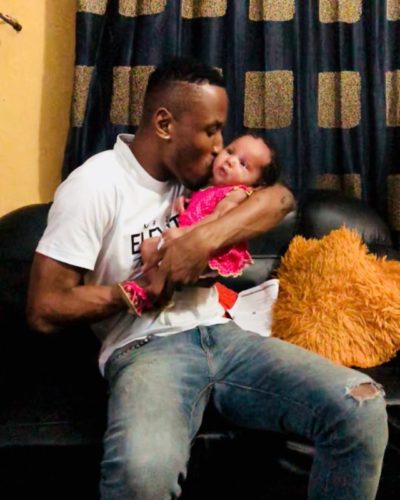 Nigerian musician Mr 2Kay’s daughter just turned a year old and the musician could not hide his happiness as he celebrated her.

The Port Harcourt breed musician sometime last year welcomed a daughter with BB Naija Gifty Powers. Although the reality star denied being pregnant and hiding the father of her child the actress took to the gram to reveal her daughter as she turned one.

Mr 2Kay and father of Alisha also put her on the gram to celebrate. He wrote the following sweet words as caption.

“HAPPY BIRTHDAY TO MY SUNSHINE… (ALISHA IS ONE TODAY ) daddy loves you so much. May God keep on Protecting u and showering His blessings on u endlessly. My little princess ❤️❤️❤️❤️❤️❤️❤️❤️❤️❤️❤️❤️❤️❤️❤️❤️ and u look so much like ur big brother”.

The ‘Banging’ crooner just concluded a concert in Port Harcourt at the Elekahia stadium with Wizkid.