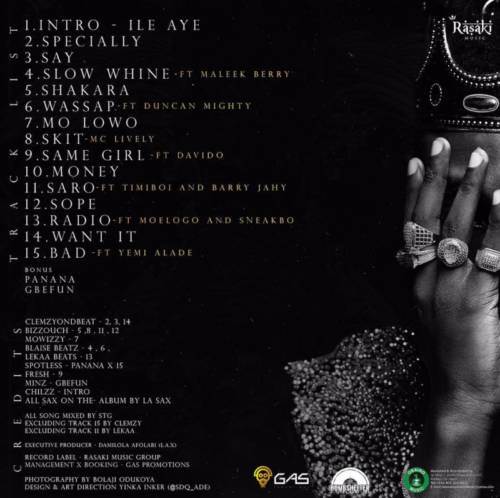 Pop star Damilola Afolabi better known as L.A.X is more than ever ready to launch his debut album.

Previously, the singer showcased his ‘RASAKING’ album cover art and now he unveils the album tracklist.

‘RASAKING’ the album will house 15 tracks including a skit. Some of the top artistes featured on the album are Davido, Duncan Mighty, Maleek Berry, Yemi Alade etc.

With production credits to Clemzy, Bizzouch, Spotless, Fresh, Blaise Beatz and others.

‘RASAKING’ the album would be officially out on 26th October on all digital platforms.

WHAT SONG DO U THINK WILL BE YOUR FAVORITE ? OFFICIAL TRACK LIST FOR “RASAKING” THE ALBUM . I WANT TO SAY A BIG THANK YOU EVERYONE THATS PART OF THIS PROJECT. THIS IS MY FIRST BODY OF WORK AND THIS MEANS A LOT TO ME. MAKE SURE YOU PRE ORDER THE ALBUM , LINK IN MY BIO 🙏🏾 . 💃🔥