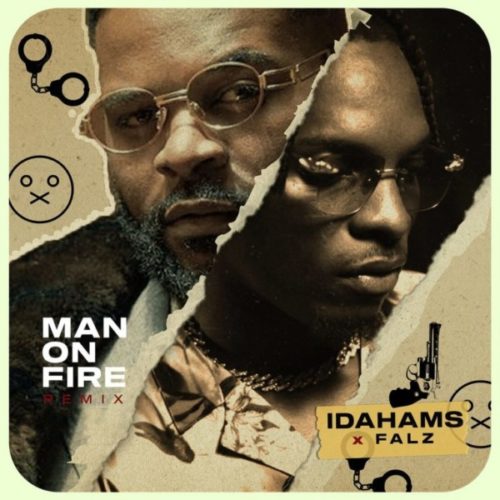 “Man On Fire” remix, featuring Nigerian rapper and award-winning lyricist, Falz, explores deeper and then it creates a stronger sense Idaham’s core listeners could relate to apart from its initial singing and chorusing sections on the first and original creation from his sophomore 7-track, EP – “Man On Fire”.

This remix is designed to keep Falz’s native listeners who understand his art of storytelling reality and entrenches to save Idahams, on his mainstream journey.

Meanwhile, “Man On Fire” EP, is Ham’s stellar extended play released in 2020 that served as an experience of his musical edge; in between was released singles and his former EP “Amayanabo” in 2019, and his partnership with Universal Music Group in the same year.

He is taking over the mainstream market and has been making excellent moves to keep in touch with fans lately. Great collaborations have paved the way and it might see him through.

“MOF”, was the fifth track from his elite pop 7-track project that was delivered at an extreme from its sonic creation: housing pop, synth cuts, piano and underneath percussion hitting and drums blustering. Invariably, the sound was a continuous hard hitter confined in a range of the blustering spectrum.

Having Falz, the bahd guy rapper for the remix makes the creation dig into critical fascination. The song now simply points out the hypocrites in relationships, the gossip, and back bitters.

“Drink water and mind your business, use that energy for yourself,” Idahams says opening the record, “Here comes the man on fire”.

He concludes as the song opens with critical points one could take note of in his/her reality.

“Man On Fire” remix, is subject to deep creativity. The chorusing and simply each verse from Hams down to the bahd guy, Falz’s verse, was very exceptional and ended in amplifying what the original creation (song) couldn’t speak up fully.

The rap in between amplifies its essence that stuck into our reality and how random people leave their own business to focus on others.

“O make I know wetin concern you for inside/Why your own you no dey mind/Why your friends gather dey talk about somebody child/And small time you go find what you talk say you dey find/Sho’ mo pe oro oloro 10 sha ma n gbe kaa kiri bayi (you see your life)/Don’t say my name unless say all na facts.”

Falz, explores through his flows and creates something relatable in between that sits and seeks to expand the whole creation of “Man On Fire”, on the sweet remix.

Of course, Idahams is talented and he played his role excellently, and having to administer another great talent for his same song seeks and has found him a stronger masterpiece from the recreation of the song.

The remix practically sustains the flavor of its initial makeup and amplified it better. Falz is a genius, and he always finds a way to fit in perfectly like he has couched in on this with an amazing brief, delivery. Exceptional!

The remix of this song is stronger and better off than it’s original to me. Idahams is quite talented and he has put out according to his strength and creativity.

Falz coming through created ubiquitous, expansion, and it’s his tang if you can relate his storytelling reality and how he maneuvers into random people’s lives through his songs.

It’s now a masterpiece and eventually, this has become a state of “Man Of Fire” (Idahams), that opines the character of his detractors and deters their motion through this song.

I hope this one passes his message eloquently to his denigrators and makes him better at choosing the right collaborations that could easily expand his career and help him find what works perfectly – “Man On Fire!”