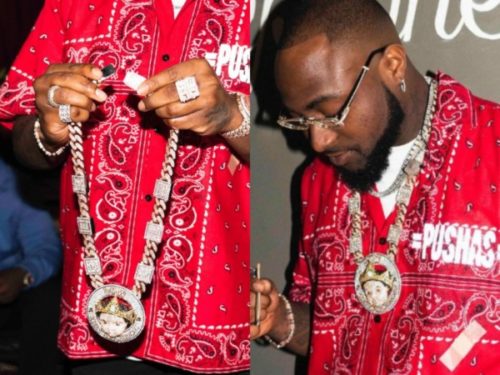 Davido brags about how much his chains are worth in new tweet.

DMW leader Davido is in the news again as he talks big on his spendings. In a recent show off on Twitter the ‘Fem’ hitmaker alleged he spends about $3 million on jewellery.

The critic also mentioned to Davido that Wizkid bagged a $3 million deal to become the face of UBA. Sometime last year Wizkid was unveiled as the official brand ambassador for the United Bank for Africa (UBA) with the deal worth millions in dollars.

In a swift response, Davido replied that he spends way more than that on his jewelleries. The DMW honcho is well known for his extravagant lifestyle and his love for jewellery and other assessories.

Davido said "fvck endorsement deals" because he doesn't get proper offers from proper companies… Who would say no to a UBA deal worth $3million?
This is why it is very important for artists to grow organically..