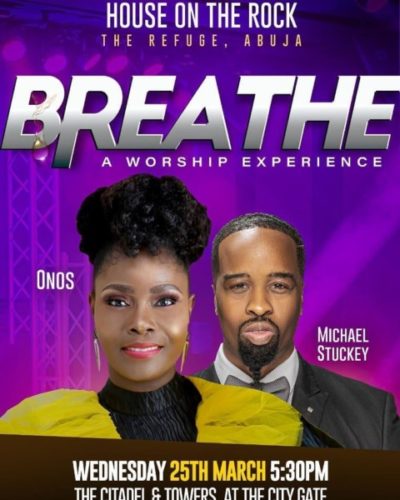 Hot on the heels of the release of the live video for Have Your Way, Onos Ariyo has announced that the Breathe concert train is making a stop in the city of Abuja. Announcing the Abuja edition on her Instagram page, the award-winning singer also intimated that the Abuja concert will feature American gospel music minister Michael Stuckey.

Michael Stuckey is an accomplished worship leader who has served as a lead vocalist for Ricky Dillard & New “G.” He is the founder of Canada’s first annual gospel awards show, the Glass Awards. Michael also has connected and ministered in 13 countries throughout Africa and the UK.

Breathe Abuja Edition is taking place at the Citadel and Towers, House on the Rock Church, Abuja.

The concert has been to several cities such as Douala, Calgary, Fort McMurray Accra, Nairobi, Monrovia, Lagos with the last being Warri gathering thousands to the prestigious praise and worship music gathering. This is in continuation of the promotional effort for the album Breathe which was released August 2019 and has now garnered over 160,000 streams on Boomplay. The album features hit songs “Your Name Jesus”, “Glorify Emmanuel”.