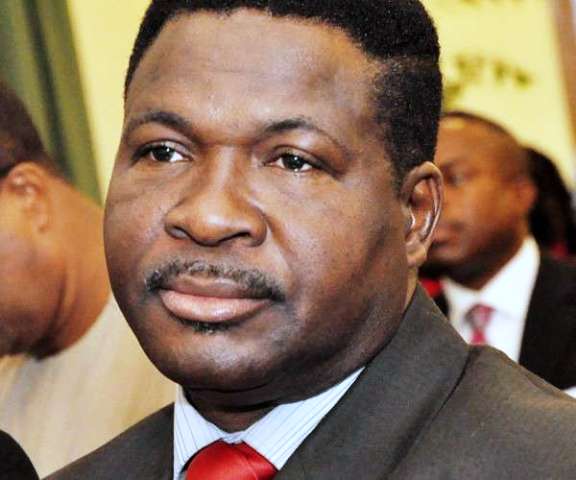 There was serious drama in Lagos Monday as youths who were in attendance at the 14th Annual Chief Gani Fawehinmi Lecture which held at the Airport Hotel, Ikeja, booed Chief Mike Ozekhome (SAN) insisting that the constitutional lawyer had fallen out of the right path and now defending corrupt politicians and looters in the country.

So unruly were the youths that the lecture had to be stopped to calm the tensed atmosphere when they continued pouring invective and unprintable words at the lawyer.

The first indication that trouble was in the air emerged when the chairman of the Nigerian Bar Association in the chapter, Mr. Adesina Ogunlana, told the audience while delivering his welcome remarks at the Fawehinmi lecture that Ozekhome had gone to the Court of Appeal for a case but had called to say he was already on his way to the event and would soon join them.

Ogunlana disclosed that some youths had expressed their displeasure at Ozekhome’s invitation to the lecture on the grounds that he was fraternising with alleged treasury looters and using his legal prowess to help them evade justice, contrary to the ideals of late Fawehinmi.

But the youths, on Ozekhome’s arrival, insisted he was not welcome at the ceremony and demanded that he takes his leave.

Because of the chants and noise, Professor Demola Popoola, a former Dean of the Faculty of Law, Obafemi Awolowo University, Ile Ife, had to stop his presentation. His voice was already drowned by the cacophony of voices.

It took the intervention of Ogunlana, Richard Akinola, another lawyer, and Mr. Femi Falana (SAN) for Ozekhome to be allowed in at the event which was also attended by Sahara Reporters’ publisher, Omoyele Sowore, Seun Kuti and members of the Fawehinmi family.

Mohammed, Fawehinmi’s son and himself a lawyer, would later speak after the completion of Popoola’s lecture, telling the youths Ozekhome was one of the proteges of his late father and that the lawyer was already in his father’s chambers when he was just nine years old.

He explained that his dad was not an advocate of violence while reminding the audience the ceremony was to honour Fawehinmi and mustn’t be turned to a theatre of violence.

“He is going to give his speech, happily, we are all going to listen to him. At the end of it, when you have your turn to speak, you can criticise him. Nobody is perfect,” Mohammed said.

When Ozekhome was eventually given the microphone, he went down memory lane, recalling his close relationship with the late legal icon and human rights activist and the inputs he made when the Nigerian Weekly Law Reports was to be started by Fawehinmi.

He assured the audience he hadn’t deviated from the path on which Fawehinmi set him, insisting that during his lifetime, Fawehinmi always stressed the point that every accused person has the constitutional rights to presumption of innocence and the right to be defended in a court of law.

“Gani Fawehinmi fought across the country, all over and Gani was against oppression, repression, and tyranny from whatever government, from any quarters howsoever.

“That was why in 1983, when the NBA said lawyers should not defend alleged politicians under the then General Muhammadu Buhari over corruption, Gani said ‘No, these people are entitled to their right’ and that Section 36 of the constitution, I think it was 33 then, allows every person’s innocence to be presumed.

“Gani led me, I was with him physically when we were defending the so-called or alleged corrupt politicians,” Ozekhome said.

However, he had hardly finished that sentence when the youths again erupted with a song in Yoruba singing ‘Iro lo n pa o,’ (He is telling lies). But Ozekhome was undaunted as he further explained he is defending alleged looters in the country today because the anti-corruption war of the President Buhari administration is one-sided.

He added that he would not relent and that he had even defeated the government in no less than 20 corruption cases, disclosing that he was just coming from the court where he just stopped the seizure of some funds linked to Mrs. Patience Jonathan.

Ozekhome, who had once been abducted by kidnappers in the past, insinuated that the youths were political thugs sponsored to attack him and said ‘I will continue to defeat your government.’

However, Falana, who spoke after Ozekhome, said the audience must not allow history to be distorted. He explained that he was also with Fawehinmi and the late legal icon never once defended anyone who had a corruption case.

“We mustn’t go away with the very misleading impression that Gani was a defender of corrupt people. No. For those that Gani defended, he never went to any court or filed any stay of proceedings to frustrate the system as it is the culture now.

“He never defended anybody tried by the EFCC or ICPC. He called a few of us and said, ‘If we cannot help to kill corruption in Nigeria, we must never frustrate the little attempt being made by Ribadu and others fighting corruption in Nigeria and that is Gani for you,” Falana said.