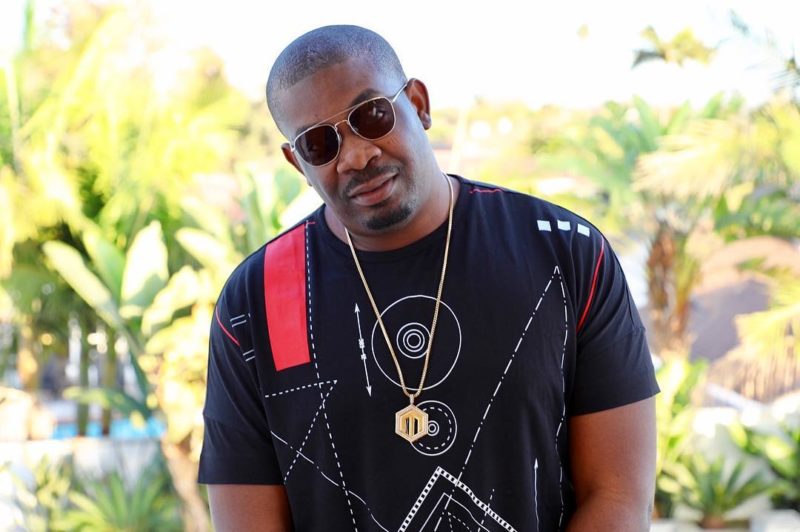 The past 24 hours has witnessed  D’banj’s name topping  the trend charts over the case of rape involving  Seyitan Babatayo.

It was reported that D’banj and his team had used police to coerce Seyitan to rescind her rape accusation.

Since the issue is  hot at the moment, Don Jazzy has decided to weigh in on the matter.

The Mavin Records boss was clear not to take a sides with anyone. In a series tweets Don Jazzy prayed the police investigate  the issue  and deliver justice.

Other celebrities  like M.I Abaga and Tiwa Savage reacted to the matter urging the police and government to do more in punishing rape offenders. While does who have been sexually abused should speak out.

See the tweets below. 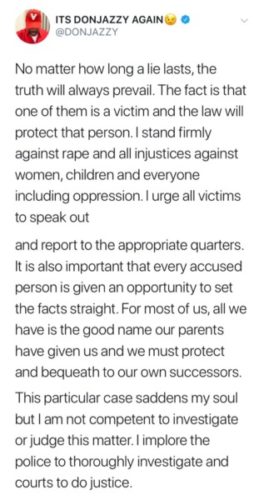 I hear you all and even though this is heartbreaking for me, my view is still the same. I stand strong with the victims of all sexual abuse so I say this: 1. Victims should always speak out n speak their truth 2. those found guilty must be punished to d full extent of the law.

Society will not improve if we do not tear down the systemic methods by which women and girls who accuse people of violating them are silenced. There can be no sacred cows on this issue..

We cannot say that we stand with women, and then be silent towards actions that say to all women clearly, it is better to be silent than to speak.. any abuse of power and authority can not be accepted in this regard

To the brave women like Kiki Mordi @AyodejiOsowobi and @ozzyetomi who used their platform to fight over the last few hours.. thank you for your courage and leadership.. to all organizations silently working on the behalf of victims of gender based violence.. thank you

Some days I am ashamed to be a man because of how much we have failed our sisters, mothers, friends and daughters.. today is one of those days.. and I know if I do not speak out today I will be complicit in a system that tells women.. “shut up and don’t say anything”