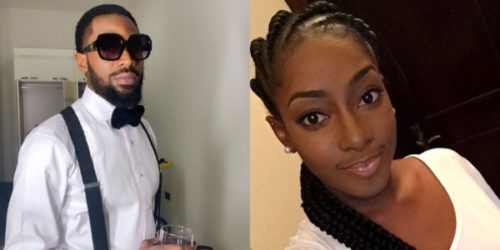 The actress from MTV Shuga Naija has called out D’banj and his team for harassing Seyitan Babatayo after the latter accused him of raping her at Glee Hotel, Victoria Island, Lagos.

Due to the allegation, D’banj involved his legal team who have taken over the case to fight the singer’s cause legally.

However, yesterday it was reported that Seyitan was arrested and kept it police custody and coerced to deleted her tweets where she accused the “Oliver Twist” singer.

Today, new tweets from Seyitan’s Twitter handle suggested that she has moved on from the incident and was never arrested. Her account was further used to promote D’banj’s new single “Stress Free”.

New revelation from Dorcas Fapson indicates that Seyitan was under duress to delete old tweets and recant her earlier statement on the rape.

Ms DSF said she spoke to Seyi over the phone and she told her how she was pressured and threatened. She also demanded Glee Hotel to release the footage from the day the incident happened.

I just spoke to @seyitannn_ . She’s ok now. She was arrested and had all her things seized & left in a cell with criminals. D’banj’ team pressured her into those tweets & threatened to leave her in prison if she didn’t recant the allegation.

D’banj told Seyitan that he has paid his lawyers 25m & she doesn’t stand a chance against him.
THE POOR GIRLIS SCARED & obviously doesn’t have the money/resources to fight this!

WE CANNOT ALLOW MONEY/POWER/STATUS to silence @seyitannn_ !!!!
@iamdbanj you are foul & disgusting. I knew that from our ‘encounter’ in LA. But this?? No.

RIGHT IS RIGHT. WRONG IS WRONG! Celebrity or not! Fuvk all that!

DEMAND THAT @hotel_glee RELEASE THE CCTV FOOTAGE FROM THAT DAY!!!!