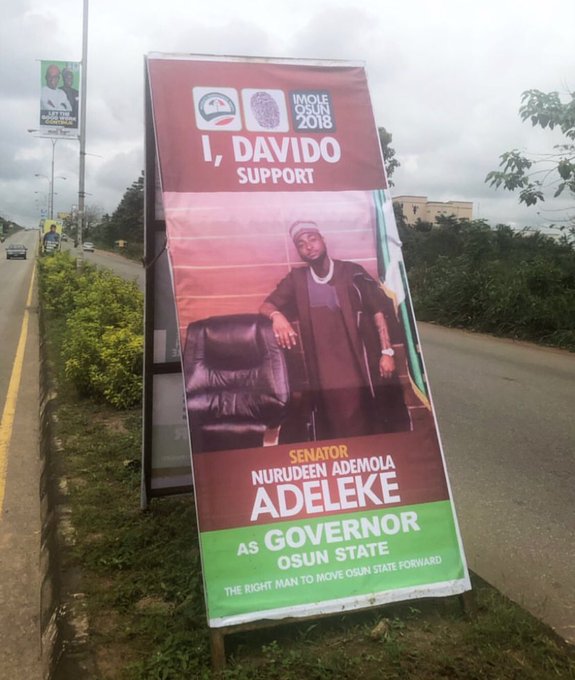 Davido Places Billboard In Support Of His Uncle’s Governorship Ambition – All paws are on deck for the election of Senator Nurudeen Ademola Adeleke as Governor of Osun State.

Nigerian pop superstar Davido has joined in the campaign to elect his uncle Senator Adeleke as the next governor of his state.

The singer has raised a campaign billboard to create more awareness in honour of Senator Adeleke. Davido is also going to perform in three locations in Osun state as part of the campaign.

MY FELLOW OSUN BROTHERS AND SISTERS , AS MOST OF YOU MAY KNOW I AM A NATIVE OF OSUN STATE , LETS TAKE OSUN TO A NEW LEVEL , ALL THE YOUTHS AND INDIGENES OF THE STATE – RISE AND DO WHAT IS RIGHT FOR OUR STATE AND THE PEOPLE . I WILL BE PRESENT IN ALL PDP RALLIES SUPPORTING SEN NURUDEEN ADEMOLA ADELEKE , UNDER THE PEOPLE DEMOCRATIC PARTY ( PDP ) ! 15th @ EDE 17th @ IWO 18th @ ILESHA 19th @ OSOGBO for the Final Rally ! BRING YOUR PVC CARDS ! IMOLE DE ! BADDEST SAY SO ! @ademolaadeleke_01