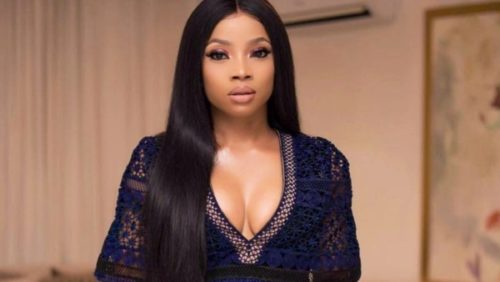 It’s a piece of sad news coming in as Asset Management Corporation of Nigeria (AMCON) took over the house of popular media personality and entrepreneur Toke Makinwa.

It is reported that Toke Makinwa’s house was seized after business tycoon Festus Fadeyi listed the property as an asset to AMCON. Fadeyi is a chronic debtor as gathered and AMCON moved in to take over the businessman’s asset to recoup his debt pegged at over N200 billion.

Apparently, Festus Fadeyi bought Toke Makinwa her house in Banana Island when both parties had an entanglement. Nigerians have quickly reacted to the news sharing their varied opinions.

The Media personality, Toke Makinwa , has allegedly lost her Banana Island house to Asset Management Corporation of Nigeria. The mansion was allegedly bought for her by Billionaire Festus Fadeyi. pic.twitter.com/gkE1X8nOhB 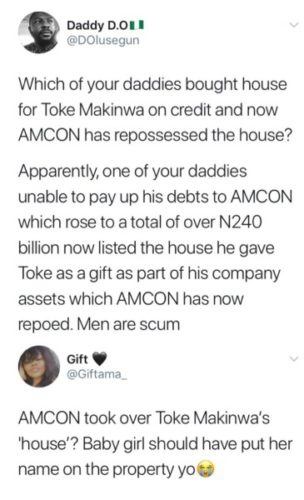 Toke Makinwa see at Cele Express moving from Banana Island to Ikotun Egbe after AMCON took over her home. pic.twitter.com/vhpGX679bY

Exactly 3 years ago, the children of Festus Fadeyi were fighting Toke Makinwa to leave their father alone, because the man was spending extravagantly on her while still indebted to Skye Bank. This man self get werey for head make we no lie

Toke Makinwa's house that she flaunted Months ago was given to her by her “sugar daddy”, Lagos-based oil and gas businessman, Dr. Festus Fadeyi, whose total indebtedness to AMCON is over N240 billion. Breeze don blow, fowl yansh don open pic.twitter.com/zlutgaLuH4

Toke Makinwa: "Hardwork gave me all I have today"

If na by handwork i for dey Canada. I for no dey site dey hustle 2k

She broke shamed men. Now they've collected the house a married man gave her in Banana Island. 08056684225 Toke call this no, they have cheap selfcon in Ikorodu

Which of your daddies bought house for Toke Makinwa on credit and now AMCON has repossessed the house?

Apparently, one of your daddies unable to pay up his debts to AMCON which rose to a total of over N240 billion now listed the house he gave Toke as a gift as part of his company assets which AMCON has now repoed. Men are scum